To celebrate World Science Day, Year 3 completed a fun and scientific filled day in class. We had the opportunity to speak to a STEM representative (Victoria – Environmental Chemist) about her work in the STEM industry. We learnt a lot about what a environmental Chemist does and what it might mean for our society.

Today we created our own rainbow patterns in milk. We explored what happens when different materials are mixed together.

We poured milk into a tray and then used pipettes to put drops of food colouring in a circle near the middle of the tray. We then dipped a cotton bud in washing-up liquid and then in the centre of the milk. We then watched the colours swirl!

We learnt that when the washing up liquid is added the piqued lowers the surface tension of the milk so that the food colouring is free to flow throughout the milk. Second, the washing-up liquid makes the fast and proteins in the milk spread out. This happens very quickly, causing the liquid to swirl.

We were amazed at the results! 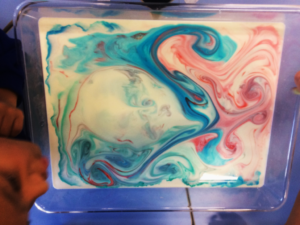 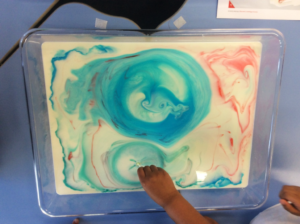 We then completed a second experiment, whereby we explored how far a sneeze (water sprayer) can travel and how we can prevent others from getting getting ill.

Throughout this experiment we learnt about the spread of microbes and their potential to infect people. We using pieces of flip chart paper stuck together, we measured out 7 metres. We then drew a stick person and placed the ‘people’ anywhere in the sneeze zone. We then used the nose (sprayer) to sneeze twice. We then measured how far the water travelled and circled the droplets in red. The furthest it reached was 6 metres! We then did the exact test twice but this time used an arm and tissue in front of the ‘nose’.

Our findings:
We found that using an arm or a tissue prevented the droplet from spreading a huge amount so this is the best way to stop sneezing reaching others.