Celebrated every 10 November, World Science Day for Peace and Development highlights the significant role of science in society and the need to engage the wider public in emerging scientific issues. It also underlines the importance and relevance of science in our daily lives.

We began the day with a live chat with Dr Fiona Lewis, a lecturer and researcher in myocardial repair and regeneration, who told us about her stem cell research to help with cardiovascular disease. She explained what qualifications that she needed to get, why she had chosen this career and the different things she needs to do day to day. The children were able to ask Fiona any questions they had and we looked at pictures of her lab. We then wrote Fiona some letters to say thank you for her time and ask her any further questions that we had.

How far can a sneeze travel and how can we prevent others from getting ill? Through this fun activity we learnt more about the spread of microbes and their potential to infect people. We measured the distance and impact of a sneeze by using water in a spray bottle. First, we stuck pieces of flip chart paper together to create a sneeze zone. Everyone drew a face on sugar paper and placed it anywhere in the sneeze zone. We stood at one end of the sneeze zone and used the “nose” (water sprayer) to sneeze twice. We then looked at how far the sneeze had travelled and how many people had been affected by the sneeze. We then repeated this but put a tissue in front of the “nose”. We looked at the problems with just using a hand to protect others from sneezes and considered the best ways to stop sneezes spreading.

If you would like to discover more about the spread of disease, as well as DNA, genes and genomes and all aspects of their impact on society check here: yourgenome.org.

In our next experiment, we created our own rainbow patterns in milk using food colouring. We made predictions and explored what we thought would happen  certain colours mixed and used our observations skills to watch what was happening.

If you try this again at home, post any pictures on Class Dojo so we can look at your magic milk results! 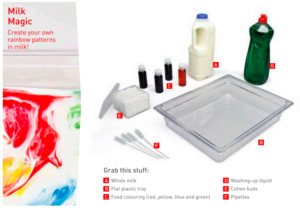 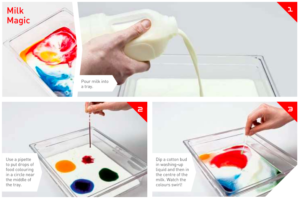